Most 100cc bicycle engines can be fitted in less than half a day with some conversions taking less than an hour. (A well chosen bike frame and teenage enthusiasm are key to a super fast installation).

Gas bicycle motors are, however, overshadowed by their relatively low powered, low range, and expensive, electric counterparts. The popularity of electric bicycle conversion kits is driven by 2 primary factors:

Despite electric motors dominating sales numbers of bicycle conversion kits, one of the best motors for bicycles is the 100cc 2 stroke engine.

Although motors for bicycles are not without issues, gas powered bicycles are lighter, more powerful, cheaper, and more convenient, than electric bikes.

In recent years, the cost of 100cc bicycle engines has reduced substantially. As a result, large capacity bicycle motors have leaped in popularity.  Typically, an additional $10 more than a basic 80cc engine kit is sufficient to purchase a higher displacement engine.

As we move further into the 2020’s, once rare performance parts for 100cc bicycle engines have become mainstream. Carburetors now compliment the motor with correctly sized fuel jets which supply the correct fuel mix. Many other performance components, like expansion chambers, provide a performance boost to both 80cc and 100cc engines.

Go back to 2021 and it was difficult to find replacement barrels and pistons for 100cc engines. Now, large capacity, “top end” conversion parts are commonplace. The upgraded barrel, carb, piston, and gaskets, are also sold as complete, low cost packs.

The cost of 100cc upgrade kits has also dropped significantly. Replacing an 80cc motor with a 100cc barrel and piston provides a great, cost effective, power upgrade. The upgrade kit can get your motorized bike back to full power (and more) with minimal effort.

If you have an underperforming 80cc engine, it makes perfect sense to boost power with a high torque 100cc upgrade kit.

I live on a steep hill, and 80cc motors struggle to climb the steep slope. 100cc engines have heaps more torque than an 80 and hardly slow at all up the ascent.

I am not alone in that I experiment with just about every aspect of the motor in an attempt to extend the engine’s capability.

Most momotorize bike enthusiasts have experimented with smaller sprockets, cut barrel ports, chopped mufflers (or fitted a variety of expansion chambers), and set the carb as lean as the engine can handle. Motors have even been modified to run aftermarket reed valves.

It is not unknown to take modifications too far and damage the barrel or piston.

If over stretching the engine damages the barrel, piston or rings, a 100cc replacement has a much improved baseline. The larger capacity motor has far more potential for increased performance. 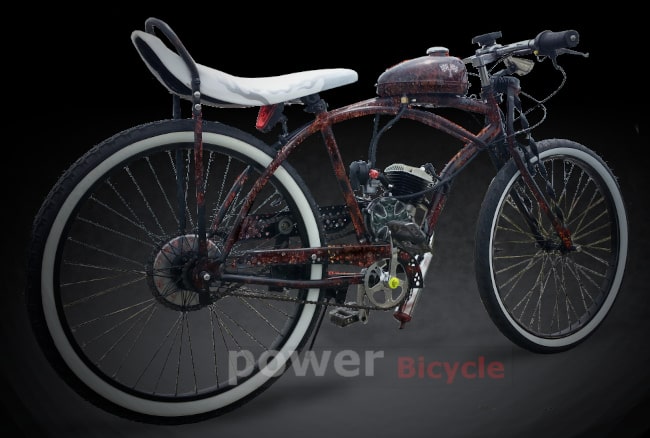 100cc bicycle motors have a wider barrel with larger cooling fins. The cylinder head for the larger capacity motor is larger and more heavily finned as it needs to dissipate more heat.

It is often overlooked, but larger engines simply look cool.

Larger engine have the same mounting points as smaller engines, but when in place on a bike 100cc motors really fill the frame. 100cc engines are bulkier and give the converted bicycle a motorcycle like appearance.

Large motors are a great asset for any bike builder who is interested in aesthetics.

100cc upgrade kits make these bicycle motors a very green environmental option. They provide a fun way to extend the life of the engine which negates the carbon emissions of manufacturing a replacement.

After many months’ of wringing the last essence of horsepower from the unit, there is often a drop in performance.

When the motor begins to fade, it again provides an ideal opportunity to fit an upgrade kit and refresh the bearings. The refresh can provide a new lease of life for a tired motor.

HOW TO INCREASE PERFORMANCE WITH A 100cc ENGINE

100cc engines have, until now, been relatively expensive. Unfortunately, they have disappointed many purchasers who expect huge increases in performance as soon as the larger barrel is fitted.

Additional parts are required in order for the larger bore engine to reach its potential.

The first thing to realize is that the engine will draw more fuel:air into the combustion chamber. The carburettor from a smaller engine will need to be re-jetted to cope with the extra gas volume that will be sucked into the engine.

Secondly, 100cc bike upgrade kits use the same bottom end as 80cc bicycle motors. The common crankshaft is limited in the speed it will spin to. The crank can only spin to the same speed despite the increase in cubic capacity.

Standard 80cc engines rev to a little over 4,000 RPM when flat out. When engines are tuned, they can reach 4,500 or 5,000 RPM before the motor begins to vibrate destructively. [Note that these are typical crank speeds. There is substantial variation between manufacturers. Although rare, better constructed bicycle motors can reach 6,000 RPM if they have a single piece crank.]

This is not to say that the 100cc motor is not a better option. The limitation improves torque and a modified gearing ratio will deliver an increase in speed.

Although a 100cc motor upgrade will not speed up the engine revs in any way, the larger barrel and piston result in greater torque, and inertia, for the same RPM. The larger motor delivers better acceleration, and the engine fades substantially less on hills.

If you want more speed from the engine, a smaller rear sprocket can be used. It becomes feasible to change out the standard 44 tooth rear sprocket provided in an 80cc engine kit, and use a 36 tooth sprocket. [often referred to as a speed sprocket].

Reducing the sprocket size from 44 tooth to 36 tooth will give a 20% increase in speed for the same engine RPM. The engine torque is improved throughout the rev range so you shouldn’t notice any difference in acceleration with the “small sprocket / large engine” combination.

Gas powered bicycle engines are reliable and it often surprises me that such inexpensive motors can handle so much abuse. I do, however, ride my motorized bike full throttle all the time. I let the motor scream to an intolerable pitch on long, steep, downhill runs. I have, at times, forgotten to add 2 stroke oil.

In addition, replacement engines, and parts are cheap, and it is fun to experiment with performance.

The bottom line is that a standard engine will run for years when you treat them well and don’t over modify the kit. 100cc engines are especially reliable as they provide more power for a given RPM. The increased torque affords the rider greater opportunity to put less strain on the motor.

Until the early 2020’s, 100cc engine kits were relatively expensive when compared to their 80cc cousins. A substantial drop in price has boosted 100cc bicycle motor kits to the gas conversion kit of choice for most.

Upgrade kits, which convert 80cc engines to 100cc, have also become commonplace. These upgrade kits allow bicycle engines to be upsized very quickly and cheaply. The boost in torque appeals to most motorized bicycle riders.

Low cost replacement top ends are also offering a new lease of life low performing 80cc bicycle engines. There is an established base of 80cc engines which are low performing or have damaged top ends. 100cc upgrade kits can reinvigorate old 80cc motors to provide a renewed service life. 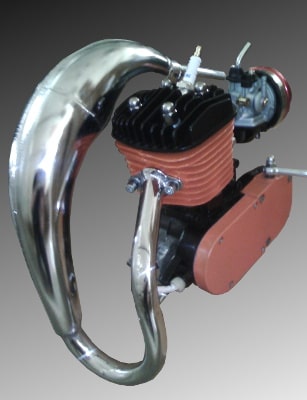 Everything About Power Bicycles
100cc BICYCLE ENGINE UPGRADES
100cc bicycle engines are now the most popular gas motor to convert your bicycle into a motorized bike. This article highlights what all the fuss is about.
Steve
Steve
Power Bicycle
Power Bicycle
Publisher Logo