Hydraulic disc brakes are becoming stronger, more durable, and more effective, in order to handle the increased mass and speed of e-bikes. The need for an eBike ABS is increasingly important to improve safety and control in emergency braking situations.

The eBike ABS developed by Bosch and Magura is a leap forward in safety for commuter bikes.

WHAT IS eBike ABS

ABS, or Anti-lock Braking System, is a safety device that prevents over-braking. The system prevents the rider from skidding when brakes are pulled too hard.

Speed sensors on both wheels can detect when the wheels lock or the rear wheel lifts. When the sensor detects an issue, the ABS controller reduces braking force to prevent the problem becoming uncontrollable.

Imagine a vehicle pulling out dangerously in front of you. A common panic reaction is to pull brakes on as hard as possible and swerve to avoid a collision. As powerful brakes are now fitted to many modern e-bikes, the rider can easily lock the front wheel in this scenario.

With eBike ABS, problem conditions are detected the second they occur. This information is relayed to the ABS controller which reduces pressure to the brake caliper.

Braking is only reduced for a few microseconds, however, this is sufficient to stop the tire skidding in that moment.

If the tire slips again, the ABS repeatedly releases the brakes for microsecond intervals until skidding no longer occurs.

It may seem that releasing force on the brakes would be less effective, however, friction between road and tire is greatest just before the wheel locks. When a wheel skids, it loses stopping power. An ABS system will, therefore, stop a bike more quickly than a skidding wheel.

eBike ABS helps the rider retain control of their e-bike by reducing the likelihood of being thrown over the handlebars in emergency, or downhill braking.

The system can be a valuable aid to stability when leaning into a turning or braking on gravel allowing the best riders to brake later and harder.

The rear wheel sensor can detect the wheel lifting when under excessive front end braking. The eBike ABS can adjust braking force to prevent the rider being launched over the handlebars.

There is a Hill Hold feature on the system which can activate the front brake to prevent the bike rolling backwards. This feature is useful when pushing the bike up steep inclines or crossing obstacles.

The eBike ABS was released only a few days ago and will quickly find its way onto mountain bikes, cargo, racer, and commuter bikes.

The ABS will be fine tuned for the style of bike. Four different tunes will be produced: ABS Trail for mountain bikes, ABS Cargo, ABS Touring, and ABS Allroad.

As eMTB riders are always looking for a competitive advantage, they are expected to be the largest group to adopt the technology. The eBike ABS will be expected to make an appearance in electric mountain bike showrooms this year.

The ABS is not yet available as an aftermarket upgrade. You will have to purchase a new bike which offers the system.

The system has been launched in the UK, Switzerland, Norway, and the European Union. The US and Canada are not part of the initial roll out.

The ABS braking system is a collaborative effort between Bosch and Magura. Bosch has tailored motorcycle ABS systems to meet the requirements of lighter bicycles. Magura has redesigned their MT C disc rotors, connectors and reservoirs to accommodate the needs of the Bosch control unit.

The small control unit mounts behind the front fork. The control unit regulates the brake pressure using information received from the sensor.

This smaller rotor is part of the sensor system and fixed inside the disc brake rotor.

Engineered from single piece alloy, these brake masters have been designed with a large oil reservoir and to provide larger volume oil delivery required by the ABS.

The Brake Masters is fitted with a two or three finger lever to accommodate different bicycle styles and rider preferences.

4 piston are intended for heavy downhill braking and maximum resistance to heat fade.

2 piston rotors are lighter all round options. 4 piston calipers would be used for downhill MTB events and cargo bikes. Enduro would typically have 4 piston front and 2 piston rear.

These provide an easy clip on airtight connection between components. You will not need to bleed the system if you have to disconnect the system to change or upgrade components.

Magura has an in-depth setup guide of how to obtain the optimal settings to suit every rider’s preference. They have details on brake master positioning, lever angles, reach, bite point, brake power, fading, brake pads, and even noise levels.

The systems can be tuned to meet the demands of the rider. Using the Kiox 300 interface or the eBike Flow app, the rider can select between ABS Allroad and ABS Trail modes.

It is extremely difficult for trail enthusiasts to judge how hard to brake when a trail is constantly changing between grass, mud, gravel, and slippery tree roots.

The ABS prevents loss of control and improves ride stability by adapting to changing surfaces in milliseconds. The ABS can compensate for the changing terrain in microseconds by adjusting pressure to the brake piston calipers.

The system is particularly effective over slippery terrain allowing the rider to use the front brake more actively and efficiently.

Sensors on front and rear wheels monitor the wheels for slippage or locking under braking. If the rider brakes excessively, the eBike ABS will anticipate that the front wheel is about to lock and the controller moderates braking pressure to the front wheel to prevent skidding.

This advanced braking system is a huge leap forward for e-bike safety and for eMTB performance. 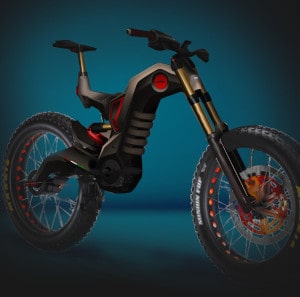 Ebike battery – How to make sure that you have the best