2021 Lyrik forks use the same casings and superb Charger 2.1 damper as the 2020 model. The DebonAir air spring receives most attention in this years revision.

There have been updates to the Charger RC2 damper used on the Lyrik Ultimate model. This years revisions are minor but keep these forks at the leading edge of Enduro racing performance. 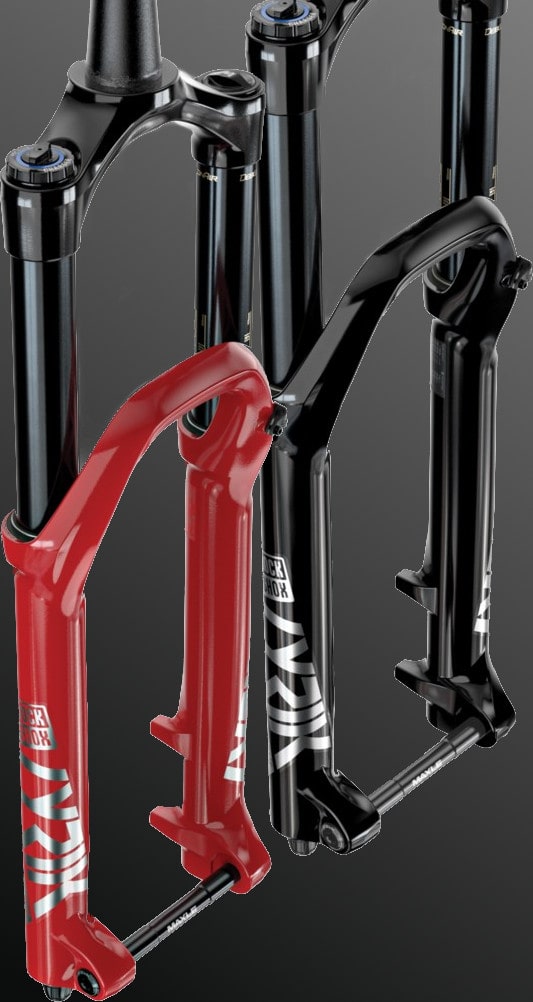 RockShox’s Lyrik Ultimate RC2 is the top of the conventional Lyrik fork range.

Lyrik Ultimate has been a class-leading enduro fork since it was introduced. Advancements of the 2021 revision of the Lyrik Ultimate are subtle but lift the fork to keep it at the leading edge of performance. The 2021 upgrades focus on smoothness and a midrange compression tune.

With refined internals, the sealed Charger 2.1 cartridge uses a redesigned SKF seal head on the damper shaft to reduce friction and noise. The innovative SKF wiper seals on the stanchions are now smoother, and new heat-resistant damper oil adds to the smooth, quiet operation.

Revised lubricant in the redesigned DebonAir air spring also helps to improve the fluidity of the forks. The SKF seals and Maxima Plush fluid are claimed to reduce friction by 30%.

Flight Attendant is an industry leading electronic suspension system. A predictive algorithm adjusts the suspension settings in microseconds to keep your suspension tuned for the track ahead.

Follow this link for more details on RockShocks Filght Attendant. 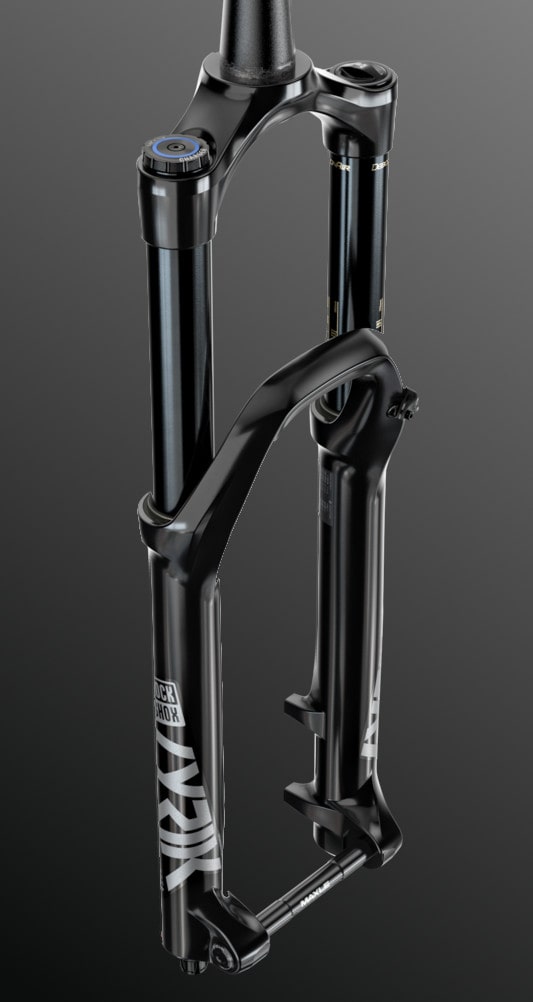 These forks are not for sale as a stand alone unit. Select + models are manufactured for production mountain bikes. Lirik

Select+ forks take the middle ground between the Ultimate and Select versions.

The Select+ is provided with a Charger 2.1 RC damper with no high speed damping circuit. 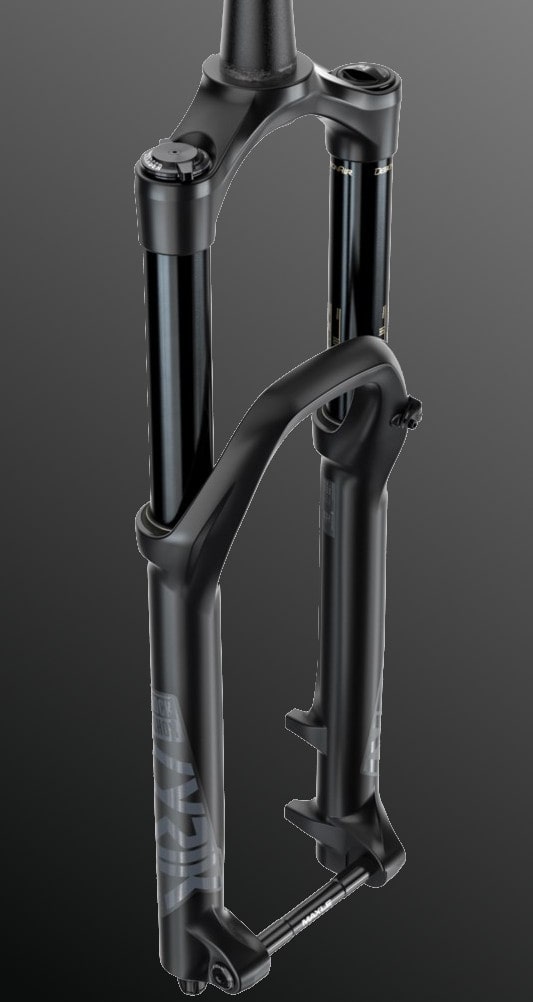 Charger dampers are extremely capable. Unless you ride them back to back, it is difficult to distinguish them from the more modern units.

The new  DebonAir C1 air spring pushes the fork higher in the stanchions. The spring is now stiffer in the initial portion of travel to enable full use of the 160 mm travel available to Lyrik models. These air spring enhancements decrease sag, giving the rider around 10% more travel while keeping the bike’s head angle and bottom bracket height.

The piston head of the air spring has also been redesigned to reduce stiction early in the travel. The piston now engages a notch on the inside of the barrel at the beginning of the piston travel. This enables air to cross between the positive and negative chambers earlier to reduce resistance at the start of the stroke.

A larger seal head also alters the air flow between the pressure chambers. The redesign enhances small bump compliance in the initial travel to soak up patter from rapid fire jittery trails.

Lyrik forks have been the industry benchmark for enduro mountain biking for years. They take big hits in their stride with the slippery smooth operation that made the Lyrik famous. The damping and rebound are easy to set up, and the forks are light, composed, and comfortable.

The Lyrik is a fantastic fork with sensitivity and long-term hand comfort remaining among the finest in class.

Fox 36 forks have gained ground against the industry dominant Lyrik for several years, and riders are certainly gaining from competition at the top. The upgraded air spring on the Lyrik lifts performance to gain the upper hand on its more expensive Fox 36 competitor.

The Fox 36 feels more like a highly sensitive linear spring than an air shock. The air spring on the Fox provides less progressive support at the top of travel. Performance of the different response of the air springs is more about rider preference. The Fox feels more controllable on fast, rocky, predicable bumps, and the Lyrik is more versatile, coping better on varied tracks.

The high-speed compression adjustment dial on the RC damper (Ultimate only) has an obvious influence on ride quality and does not have a million increments to complicate setup.

The Lyrik is lighter, less expensive, and easier to set up than Fox 36 with RockShox providing a well-considered range of damping adjustments. The 2021 models are more pleasant on long, bumpy runs than previous generations. The more compliant travel reduces rider fatigue on long, rocky descents.

I started my first run using RockShox recommended settings for my hefty 95Kg (I may have under estimated my weight after the breakfast I started the day with). The fantastically effective RockShox Trailhead tool advised 105 psi with -7 clicks of rebound for my weight on an e-bike.

Setting pressure for the track

After a circuit of the track, I checked the travel marker against the stanchion guides (This is an amazingly simple and effective measure. It surprises me that stanchion markers are not industry standard across all manufacturers). The forks used traveled less than 140 mm even with some hard landings on the trail.

Softening the air spring to 100 psi increased sensitivity, and I reset the damping and rebound to match the reduced pressure.

Lower pressure in the air spring had the forks rushing through 70% of travel when rattling over rapid-fire bumps. Even with the reduced pressure and some heavy landings, the forks never bottomed hard. I never felt the need to add the bottomless tokens provided with the forks.

Bottomless tokens reduce air volume in the DeboAir spring, ramping up resistance for faster spring action at the top of travel. Inserting tokens in the air spring provides greater resistance as the forks compress towards full squeeze. This is useful to prevent bottoming on rough tracks. Adding tokens is the equivalent of using a stiffer spring on coil spring shocks.

Tokens are handy for adrenaline junkies that thrive on extreme downhill tracks, or riders that have a habit of missing doubles. Tokens add flexibility to the forks, making them adaptable to a wider range of trails. If you ride extreme tracks on a regular basis, then Rockshox 38 mm ZEB forks would provide more firepower to handle harder circuits.

The range of damping adjustment is both extensive and intuitive. The center of the damping range is an excellent starting point, providing superb damping without further adjustment. Damping settings are not provided by the Trailhead tool although it is straight forward to set up.

I find the sweet spot of the rebound setting by using a simple push test with the low speed circuit closed (fully anti-clockwise) on the RC2 damper.

I begin with the high speed damper set at the mid point of its range. Standing beside the bike, I push down hard on the forks, and quickly release. I gradually reduce rebound damping until the front wheel lifts a few mm from the ground when I let go of the bars. Once I’ve found this ‘bounce’ point, I simply pull the rebound back one click.

Using 3 clicks of compression damping, with rebound set 8 clicks from open, worked best for me. More rebound made the forks too lively, and I found 8 clicks set the rebound perfectly, taking a little longer to settle back.

The RC2 damper on Lyrik Ultimate forks has an added Low Speed Circuit to tune out slower dips and bumps. Setting the slow speed circuit is most noticeable to reduce fork dive when braking.

The mid-position of the five possible low-speed settings is now comparable to the former fully open option. The acceptable range of low-speed compression adjustment has been greatly expanded.

Adding around three clicks from closed on the LSC helped reduce fork dive for a stiffer downhill ride, but the small bumps were more pronounced. As you click up (clockwise) through the low speed settings, the forks pushed back harder in corners, and the bike rides higher. As the clicks go up, fork bounce is reduced on hard pedaling sections for a more efficient transfer of power, but a less comfortable ride.

You can feel the difference that the low speed damping circuit provides. Adjusting the LSC helped in some sections, while making other areas a little slower than I wanted. You have to ride the Ultimates for a while to find which settings work best for the trail you want to attack.

LSC settings are fantastic, but take a little time to figure out what works best. What you gain in corners and power, you lose in bump control and comfort.

The Lyrik provides Enduro World Series winning performance straight out of the box. Lyrik forks match the performance of their major competitor, the Fox 36, at a lower price point.

RockShox Lyrik is the fork of choice for many top e-bike riders. 10 time world champion Nico Vouilloz owes much of his success to the performance of Lyrik forks.

I ran 10psi lower pressure than the Trailhead tool suggests for the Debonair air spring. For the tracks I ride, I found that lower pressure balances support and sensitivity across a wide range of terrain. I didn’t feel the need to add spacers or tweak damping to achieve better results.

The updated model offers incredible traction riding higher in its travel. The increase in initial pushback allowed the bike to take bigger drops. The forks maintained their poise with the same degree of comfort, and support of previous generations of Lyriks

The Rockshox Lyrik still tops its competitors in price and capability. It is also the most forgiving in its class focusing on reducing rider fatiguing on long ambitious tracks.

The lower damping threshold on the new model gave me confidence to run more high-speed compression giving a livelier feel. Even over severe rocks, increasing a few clicks didn’t cause any sharpness or discomfort in the hands after repeated strong strikes.

The distinctions are minor, but this year’s Lyrik is superior. The Lyrik is exceptionally smooth and comfortable on extended runs. It provides superb tracking to avoid holes, and support when riding hard.

Everything About Power Bicycles
RockShox Lyrik forks. The Enduro champions
I detail RockShox Lyrik forks exploring the different options available and how they perform. I explore what you get, how much they cost, and I cover the 'new for 2022' Flight Attendant.
Steve
Steve Baillie holds a degree in electronics and electrical engineering and has over 20 years working in the motorized bicycle industry
Power Bicycle
Steve - Power Bicycle
Publisher Logo

Specialized Mountain Bikes – Why we love them

GIANT ebike MTB and why you should buy one