Check the latest Gas conversion kit & e-bike prices on Bikeberry - Power-bicycle is reader supported. When you buy through links on our site, we may earn an affiliate commission.

You may have thought that Nitrous Oxide Systems (NOS) were the expensive realm of high powered drag racers.  We find that this is not the case as we examine the advantages of cheap and simple NOS systems designed for low cost bicycle engines. Nitrous Oxide is one of the simplest, least expensive ways of providing a significant horsepower increase to your engine, quickly adding performance you can feel in the seat.

Nitrous oxide increases the amount of oxygen taken in each induction cycle. Air contains around 21% oxygen, where Nitrous Oxide contains approx. 36% oxygen held in a looser chemical bond than air. If you add Nitrous Oxide, you increase the total oxygen level significantly, providing a bigger bang.

A side effect of nitrous injection is the cooling effect on the intake temperature. When released from the pressurized container, nitrous oxide temperature drops by around 130 degrees F, which can cool the intake charge by up to 75 degrees F. This provides a higher density gas mixture at the intake resulting in additional power.
The big advantage of nitrous is that it provides a short burst of power on demand at the touch of a button. Usually, the N2O system provides 2 to 3 seconds of increased power before the engine begins to miss-fire and NOS loses its efficiency.  Otherwise, you don’t even notice it’s there.

What to expect in the NOS kit

We all want to squeeze some more performance from our bicycle engines. See some quick, simple and cheap tuning options that will have your bicycle tearing up the road.

Horsepower When You Need It

Designed to gain up to 20% in horsepower at full throttle, the NOS system is fantastic when talking those small hills that slow the engine down. The NOS system can also provide a significant increase in top speed. Note, however that the unbalanced crank of most bicycle motors can result in engine failure if revving too hard.

Torque gains are even greater as there is an increased combustion at a lower rpm range resulting in a significant improvement in acceleration.

Nitrous offers you more performance per dollar spent, than almost any other performance modification

Nitrous Kits can easily be removed or transferred to another vehicle unlike conventional tuning parts, such as exhausts and intakes

As Nitrous Oxide (N2O) is used only when needed and has the advantages of complete drivability, and normal fuel mileage, while not in use. Nitrous works best with motors that are stock or mildly modified.

N20 installations are very easy, taking only a few minutes with basic tools to install.

There are two methods of connecting the Nitrous system:

a) Direct feed into the inlet manifold

b) Indirect feed into the air filter of the carburetor

For 4-stroke bicycle engines, it is preferable to connect the N2O feed directly to inlet manifold.  Feeding the Nitrous directly into the engine between the carburetor and the cylinder block will produce a greater burst of power.  You should, however, be aware that connecting after the carburetor  will weaken your fuel:air ratio.

By contrast, it is NOT recommended that you connect a Nitrous line directly to the intake manifold of a two stroke bicycle engines.

Although this produces more power, a direct connection to the inlet manifold will “lean” the fuel ratio creating both hot running and reduce the amount of 2-stroke oil in the fuel mixture.

1. Connect the end of the NOS delivery line into the back of your air filter as shown:

It is not recommended to connect the Nitrous line directly to the intake manifold in two stroke engines. Although this produces more power, direct connection to the inlet manifold will “lean” the fuel ratio creating both hot running and reduce the amount of 2-stroke oil in the fuel mixture.

The Nitrous Oxide supply tube is a perfect fit for the air holes in the back of the speed carburetor. A push fit should be sufficient but you can add a little glue to secure the tube if required

The Nitrous Oxide supply tube is a perfect fit for the air holes at the bottom of the NT carburetor. A push fit should be sufficient to secure the tube but you can add a little glue to the end of the tube if required

Cut a section off your left side handle bar twist grip to allow the NOS trigger to be positioned securely.

The left side handlebar grip should look like this. The cut in the grip will allow the NOS trigger to fit snugly against the handlebars.

We all want to squeeze some more performance from our bicycle engines. See some quick, simple and cheap tuning options that will have your bicycle tearing up the road.

Use short 1 to 2 second bursts of N2O for best effect. Holding the trigger longer than this will often result in misfiring and reduced power. When using NOS Systems we recommend an increased ratio of 2-stroke oil. 20:1 ratio Petrol:Oil (50Ml/Litre of petrol. We recommend Valvoline Racing 2-stroke oil. Do not use synthetic 2-stroke oils.
Position the NOS trigger away from the brake/clutch levers and twist grip using cable ties to secure the housing in place. The system is shown fitted under the handle bars in this image. Remember that the housing will need to be unscrewed to replace the NOS canister so allow a little slack in the inner cable tie.

4) Insert a NOS canister into the trigger housing. Tighten the housing until the canister is ruptured. Around 30 seconds on N2O is now available when the trigger is pulled. 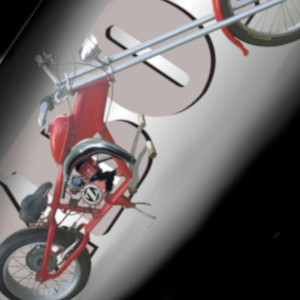